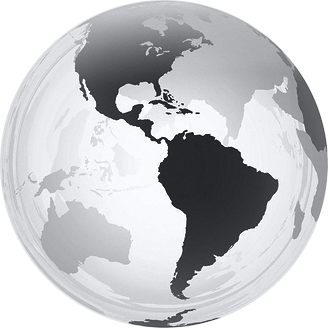 Introduction to Coordinate Systems and Projections

This guide was created by the staff of the GIS/Data Center at Rice University and is to be used for individual educational purposes only. The steps outlined in this guide require access to ArcGIS Pro software and data that is available both online and at Fondren Library.

The following text styles are used throughout the guide:

Folder and file names are in italics.

Names of Programs, Windows, Panes, Views, or Buttons are Capitalized.

'Names of windows or entry fields are in single quotation marks.'

"Text to be typed appears in double quotation marks."

If you are completing this tutorial from a public computer in Fondren Library and are logged on using the gistrain profile, follow the instructions below:

If you are completing this tutorial from a personal computer, you will need to download the tutorial data online by following the instructions below:

Inside the Projections geodatabase, you will notice three feature classes.

After selecting a feature class, the right side of the Catalog view now shows the Details panel, which displays the metadata provided for this feature class. In this case, no metadata has been filled out by the data provider.

This feature class contains a single polygon delineating the boundaries of Harris County. It was obtained from Esri’s Census 2000 TIGER/Line Data website at http://www.esri.com/data/download/census2000-tigerline, which is no longer online, but the same data can be obtained from the United States Census Bureau's TIGER/Line webpage at https://www.census.gov/geo/maps-data/data/tiger-line.html.

This feature class contains centerlines of all of the major roads within the greater Houston region. It was obtained from the COHGIS 2011 route datasets link on the City of Houston GIS (COHGIS) 2011 Datasets website at http://mycity.houstontx.gov/home/cohgis.html, which is no longer online, but the same data can be obtained from the digital collection in the GIS/Data Center.

This feature class contains the point locations of all schools in Texas. It was obtained from the Download Schools link on the Texas Education Agency (TEA) Texas School District Locator – Data Download website at http://ritter.tea.state.tx.us/SDL/sdldownload.html, which is no longer online, but the same content can be downloaded at the new Texas Education Agency Public Open Data Site at http://schoolsdata2-tea-texas.opendata.arcgis.com/.

All GIS data is created in a particular geographic coordinate system used for mapping locations on a three-dimensional sphere, based on measurements of latitude and longitude. In addition, much GIS data has already been projected onto a two-dimensional plane, based on linear measurements, such as feet or meters. In order for ArcGIS to position a data layer in its proper geographic location, it must be told the proper coordinate system and projection in which the data coordinates were originally created. Otherwise, the data layer can be displayed as an image of sorts, but the image will not necessarily line up spatially with other data layers in the map.

Determining If Layers Are Defined

Now you can add any additional layers to your map.

Now you will investigate whether or not the coordinate systems of the data layers are defined.

Under the ‘Spatial Reference’ section, scroll down and notice that both a geographic coordinate system and a projection are listed, which indicates that the coordinate system of this feature class has already been defined.

The general type of projection is Lambert Conformal Conic, but its properties (central meridian, standard parallels, latitude of origin, etc.) have been modified to be optimal for South Central Texas. These modifications are saved under the Projected Coordinate System name NAD 1983 StatePlane Texas South Central FIPS 4204 Feet. The State Plane projection system divides each state into multiple planes, or zones, following county boundaries that are suitable for mapping local regions within each state. Houston falls within the South Central plane in Texas.

Finally, notice that the linear unit for this projection is US Survey Feet, which means that the XY coordinates for the data are recorded in feet.

Note that the Schools feature class uses the same geographic coordinate system as the MajorRoads feature class: GCS North American 1983. Even the general projection type is the same: Lambert Conformal Conic. However, its properties have been modified to be suitable for all of Texas, rather than just the South Central portion of Texas, so the projected coordinate system name is now Texas Centric Mapping System/Lambert Conformal. The Texas Centric Mapping System is an example of a statewide projection that is suitable for mapping the entire state. Statewide projections are commonly developed for large or elongated states, such as Alaska, California, Michigan, and Texas, which would otherwise be divided into numerous small bands using the State Plane system.

The geographic coordinate system and projection for each of the three feature classes you investigated are summarized in the table below.

You will now see what happens when you attempt to view an undefined layer in a map. As previously mentioned, the map takes on the coordinate system and projection of the first layer added to it. In this case, since the MajorRoads layer was the first layer added, you expect the map will take on the State Plane Texas South Central projection. To verify this, you will check the coordinate system of the map.

Notice that both the MajorRoads layer and the Schools layer appear to line up properly, even though they have different projections. This is because ArcGIS is able to perform on-the-fly projection, as long as the coordinate systems of both layers are defined. On-the-fly projection means that the Schools layer is being superficially displayed in the State Plane Texas South Central projection of the map, based on calculations performed by ArcGIS; however, the projection of the Schools feature class itself has not been altered from the Texas Centric Mapping System projection.

Now you will see how ArcGIS handles undefined layers.

Notice that the County layer does not appear where it should on the map. If you zoom out far enough, you will see that it is in the middle of the Pacific Ocean. This is because ArcGIS does not know where to locate the County layer relative to the other layers, since it is not defined. Instead, ArcGIS does the best it can and treats the coordinates of the County layer as if they were in Texas South Central State Plane coordinates, even though they are not.

Notice when you move your cursor around the map, the coordinates listed in the bottom of the map view are similar to those shown below, indicating that Houston is located at 95°W, 29°N in NAD 83 in decimal degrees.

While those coordinates are being displayed for general reference purposes, recall that the XY coordinates for data in the State Plane projection are actually stored in feet. You will now change your map view to display units in feet, so that you can see the actual XY coordinates stored in your data.

Now, notice when you move your cursor around the map, the coordinates listed in the bottom of the map view are similar to those shown below, indicating the location of Houston in the State Plane coordinate system with units of millions of feet.

It is evident that both layers are being drawn in the map, but ArcGIS simply does not know how to line them up properly. Notice when you move your cursor around the map now, the coordinates are similar to those shown below, indicating units around 95W and 29E feet.

Whenever you come across X-coordinates between -180 and 180 and Y-coordinates between -90 and 90, you can be fairly sure that they are actually geographic coordinates of latitude and longitude listed in decimal degrees. The fact that you previously observed that Houston is located at 95° W, 29 N° is further confirmation that the county layer was created in a geographic coordinate system, rather than a projection. In this case, ArcGIS is treating these coordinates in decimal degrees as if they were coordinates in feet in the State Plane Texas South Central System, with the end result of locating Harris County near the 0,0 origin of the coordinate system in the middle of the Pacific Ocean within a single square foot.

Whenever you encounter this type of situation, where two layers show up in the Contents pane, but do not line up as you expect them to, you know it is most likely a projection problem.

Of the three feature classes you examined, the County feature class was the only one that was undefined. Since the spatial reference information cannot be located using ArcGIS, you must turn to the source of the data itself. The data was originally downloaded from the following website: http://www.esri.com/data/download/census2000-tigerline, which is no longer available. A screenshot of the metadata provided on that website appears below. 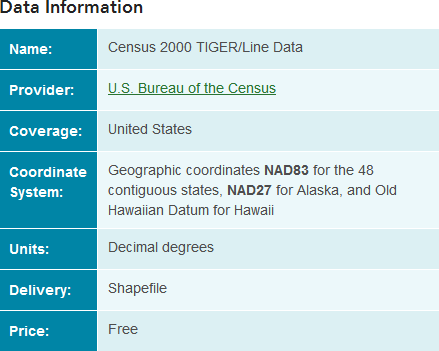 Now that you know the geographic coordinate system of the County feature class, you will need to define it, so that ArcGIS knows, as well. Please note that the geographic coordinate system and projection must be defined based on metadata provided from the data source itself. If you cannot locate such metadata, you should contact the provider of the data for the information. You cannot simply guess or decide which projection to use when defining the data (though, occasionally, you may have to resort to educated guesses and trial-and-error when metadata absolutely cannot be tracked down from the data provider.)

Notice that the County layer has been projected onto the correct location of Harris County.

Notice that the geographic coordinate system is now listed, since you have defined the feature class.

If you are only interested in creating a visual map, as you have done now, then relying upon on-the-fly projection will suffice. If, on the other hand, you are interested in performing any sort of calculations between the layers that rely upon distance, area, or spatial overlap, then it is recommended that you use the same projection for all layers. In addition, you can only measure linear distances in a projected coordinate system, not in a geographic coordinate system, so the County layer would need to be projected anyway, before any sort of measurements could be made.

Now that all of your data has been defined, you can transform all the feature classes into a common projection. Unlike the process of defining data, where there is only one projection you can use (the one specified in the metadata), when projecting data, you can select whichever projection best suites your particular study area and research question measurement types. Since your data focuses on the Houston region, the State Plane Texas South Central projection would be suitable.

Determining Which Layers to Project

You will now repeat the same process to re-project the Schools feature class from the Texas Statewide Mapping System projection into the State Plane Texas South Central projection.

All of your layers have now been projected into the State Plane Texas South Central projection.

Since all layers in your data frame are now in the same projection, you could proceed to make accurate calculations of distance and area between the layers.