The Hetrogeneous Habanero-C (H2C) language under development in the Habanero project at Rice University provides an implementation of the Habanero execution model for modern heterogeneous (CPU + GPU) architectures.

The Heterogeneous Habanero-C (H2C) language, compiler and runtime framework is specifically designed to achieve portability, productivity and performance on modern heterogeneous (CPU+ GPU) architectures. The main goal is to take a machine independent program written in H2C and generate a machine specific executable.

Some highlights of H2C include:

H2C requires the underlying platform to support OpenCL. The H2C compiler relies on a Machine Description (MDes) file. It can be provided by the user or automatically generated by an auto-tuner. H2C uses an offload model wherein the CPU is the host and both CPUs and GPUs are devices.

A short summary of the H2C framework is included below. Details on the underlying implementation technologies can be found in the Habanero publications web page. The H2C implementation is still evolving. If you would like to try out H2C, please contact one of the following people: Deepak Majeti, or Vivek Sarkar.

The language constructs are classified into communication, computation and synchronization constructs.

The async construct, is used to asynchronously transfer data among multiple devices. One can easily overlap computation with the asynchronous data transfers.

The finish statement, finish <stmt>, ensures all the data transfers within <stmt> have completed.

The forasync construct is a data/task parallel loop. It is the programmer's responsibility to ensure that loop iterations are independent.

The finish construct ensures all the tasks spawned inside it are completed.

In the first phase, the H2C compiler translates a H2C program down to a C program, OpenCL kernel and the corresponding host program. Parallelism experts can optionally choose to add optimized OpenCL kernels. The compiler uses a Machine Description(MDes) file to generate a target specific OpenCL kernel and communication. The MDes file can either be specified by the programmer or automatically generated by an auto-tuner.

In the second phase, a standard C compiler is used to build an executable from the generated intermediate files along with the H2C runtime and OpenCL runtime. 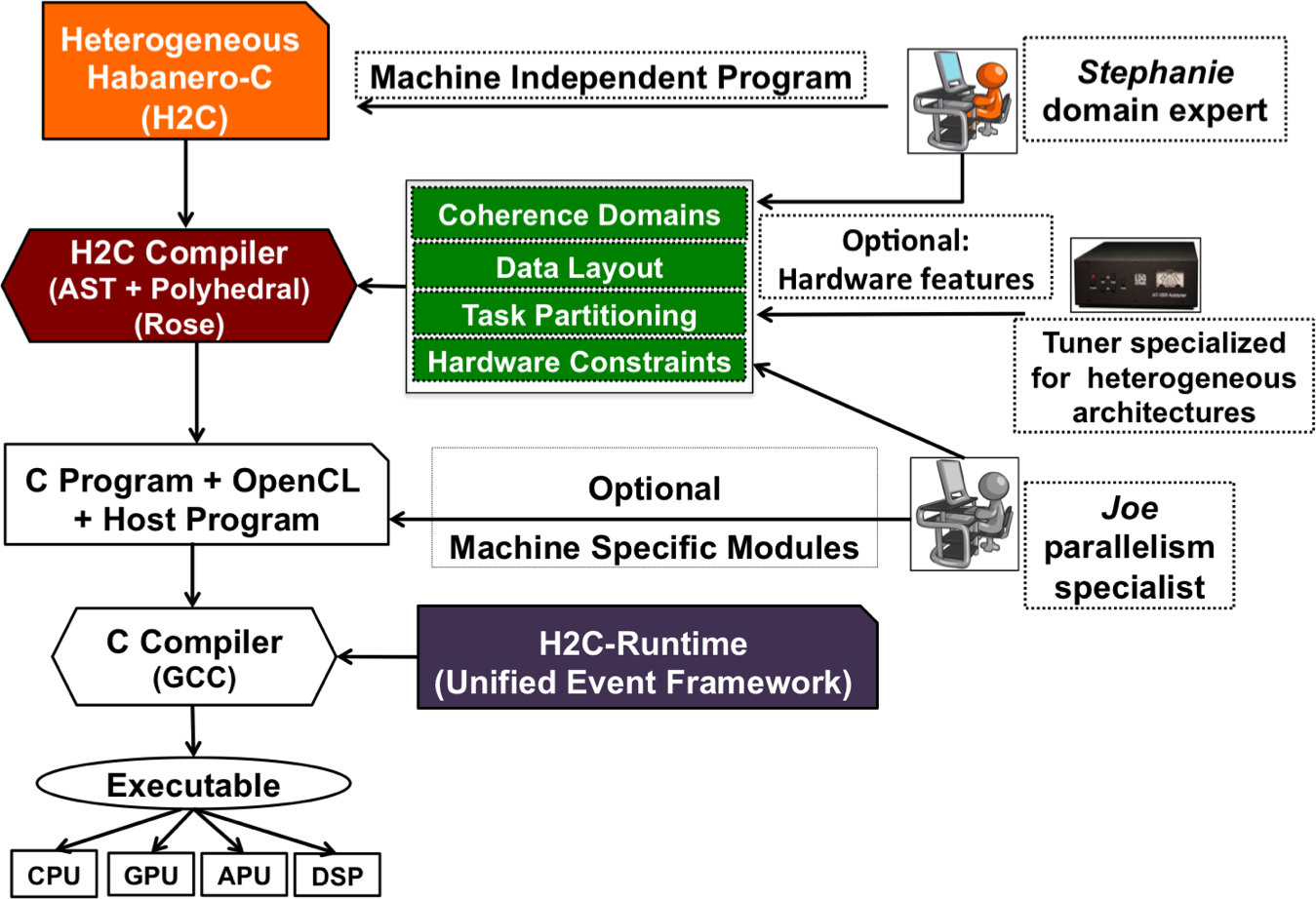 The H2C runtime includes a memory manger, scheduler and interfaces with the OpenCL runtime.

1) The forasync construct cannot be nested in the current implementation.

2) There is no compiler check for correctness on the forasync body. Any code pattern not supported on the target device will result in runtime errors.

3) Pointer arithmetic on arrays which are communicated between CPU and GPU is not supported.

Partial support for Heterogeneous Habanero-C was provided through the CDSC program of the National Science Foundation with an award in the 2009 Expedition in Computing Program.